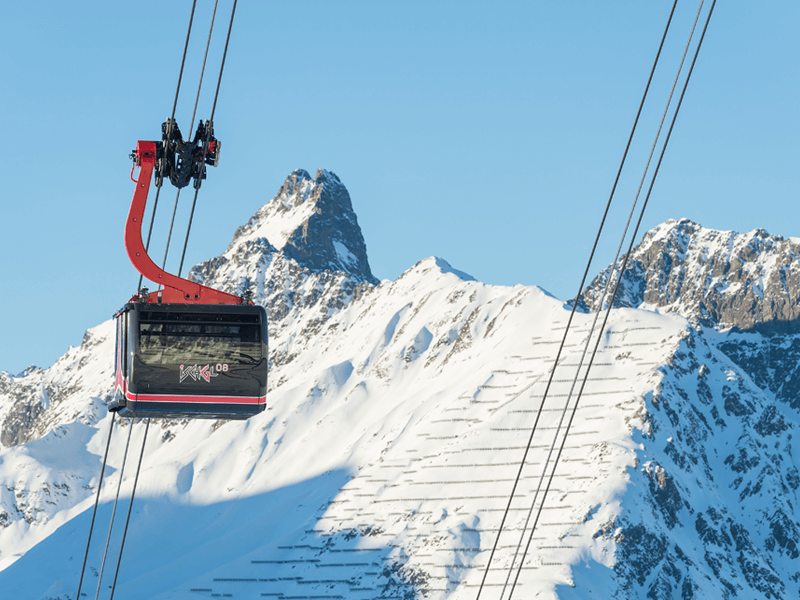 The new Pardatschgratbahn was opened in Ischgl / Tirol at the start of the winter ski season 2014/2015. The new tricable gondola lift '3-S' has a vertical rise of 1,251m which is the largest that has ever been achieved in the world. It is also one of the fastest, moving at a speed of 7.5 m/s. The technical details of the Pardatschgratbahn are also impressive: It is the first gondola lift system in the world that supplies the cabins with power during its journey. Up to three generators are used per gondola providing a continuous supply of power. This means that all 28 seats for the passengers are continuously heated. There is also enough energy available for interior lighting, heating and information boards/screens.

The new type of power supply via generators attached to the gondola meant that a completely new cabling system was needed. LÜTZE worked closely with the Austrian company Doppelmayr, the world's leading gondola lift constructor, to develop this system. LÜTZE faced many challanges. When designing the cables, the LÜTZE engineers had to focus on ensuring that the cable assembly process was simple and uncomplicated. The cables had to be able to withstand the extreme weather conditions and UV radiation from the mountains, and also be able to cope with perpetual movements.

In 1990 a monocable gondola lift with 4-person gondolas was opened for the ski enthusiasts in the ski resort of Ischgl / Idalp. As a result of the growing number of visitors, this gondola lift that had two partial routes and a mid station had reached the limits of its capacity. The ski resort’s visitors were faced with long waiting times at the lifts, which is why the new Pardatschgratbahn was opened in the winter season 2014 / 2015. It takes ski enthusiasts directly from the eastern part of the town centre straight up to the Pardatschgrat without stopping. Now, 2,800 visitors can be brought comfortably up to the ski slopes every hour. The upper section of the old ski lift has been left in place to allow skiers to ski down from the Pardatschgrat to the previous mid station.

Cables and wiring concept from LÜTZE

When we received the enquiry from Doppelmayr, we needed to act quickly. Within the space of just 8 weeks, the LÜTZE engineers developed and created a functional cabling concept with the associated connectors and cables. However, one thing was clear right from the start: in light of the demands made by this system, a standard solution was simply not going to be enough; to satisfy the specification existing cables would need to be adapted. This meant designing a new combined cable which was able to not only feed the voltage from the independent generators into the cabin, but also carry the signal for the thermo-sensors.

The plans provided for additional signal lines to monitor the temperature of the generators so that action could be taken in the event of overheating. There was one further condition: for assembly reasons, steps needed to be taken to ensure that the individual cables could be connected at different points.

One of the prerequisites for solving these technical challenges was the successful long-standing partnership between LÜTZE and Doppelmayr. The capability and experience Lütze has in the field of connectivity, which has been built up over many years, is well known to Doppelmayr. Another advantage for the connectivity engineers at Lütze was that they were able to make use of many years of in-house cable construction expertise.

The LÜTZE engineers opted for heavy-duty industrial plug connectors for the Pardatschgratbahn. It was also necessary to compromise between the cable strength, bending radius and maximum cable cross-section. The new cable was equipped with a black, halogen-free PUR sheath to ensure it was able to withstand extreme conditions and the high UV radiation in the mountains. This ensures reliable operation even in the case of temperature fluctuations of between -40 °C and +80 °C.

The new PUR cable from LÜTZE allows a very small bending radius of up to a maximum of 10x its own diameter (10 x D) and is therefore highly suitable for tight installation spaces and movements.

Background: The generators work similarly to a bicycle dynamo and are placed above the cabin on the casters to generate current when the cabin moves. Due to the fact that the cables come directly from the generators down to the terminal box, they are always in motion as the cabin moves, and therefore need to be able to withstand bending loads.

Connector and assembly concept by LÜTZE

LÜTZE supplied the new cables complete with mounted IP65 connectors. LÜTZE opted for sturdy aluminium connectors and casings with a special surface finish making them highly suitable for outdoor applications. For space reasons, some connection cables needed to be supplied without pre-mounted connector casings because this was necessary for installation into the linkage. The LÜTZE cables were prepared to allow simple 'plug&play' assembly on site.

Even the two terminal boxes were completely manufactured and wired by LÜTZE. These serve as transfer points and a central collection point. Amongst other things, they also contain 80 fuses. The boxes satisfy the IP65 standard and protect the elements inside against all weather conditions, even if covered by snow or melting snow. They also have an integrated forced ventilation system, an installed diaphragm that prevents condensation from forming on the inside.

The Ischgl ski resort: The world famous ski resort of Ischgl lies between 1,400 and 2,872 metres above sea level in the Paznaun region, between the Silvretta and the Verwall group. The ski season starts at the beginning of November and ends at the beginning of May. The region offers 238 kilometres of pistes and 45 lift and gondola lift systems. Around 25 million people use the ski lifts in this region every season.