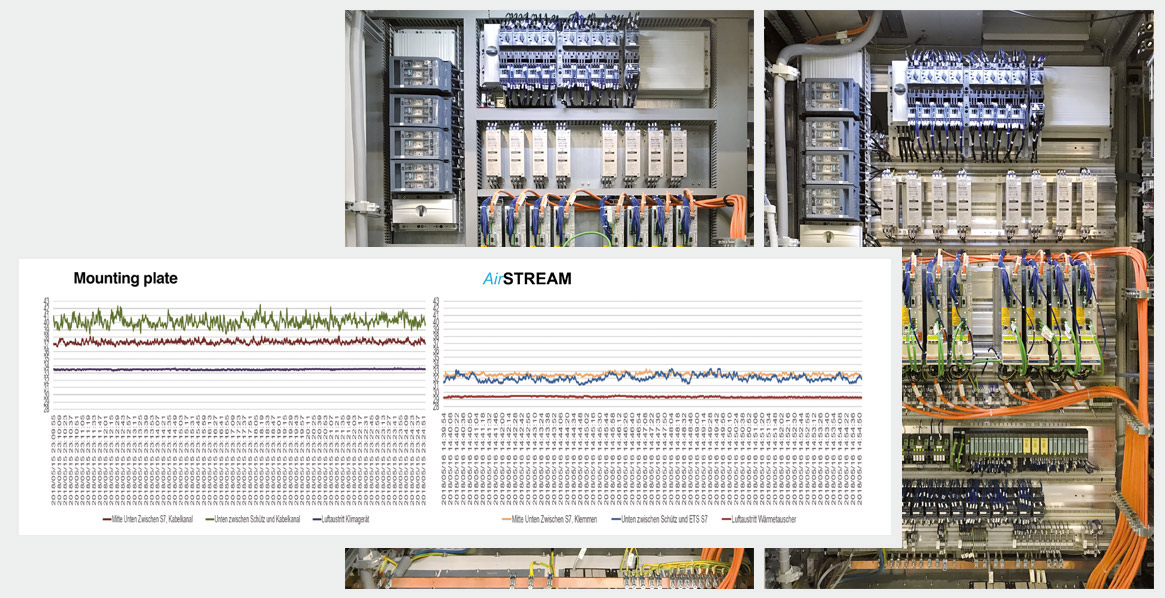 Homogenous climate in the control cabinet

A series of measurements by an automobile manufacturer demonstrated the huge potential of duct-free wiring.

A large number of parts and power electronics can be fitted into control cabinets. It is little wonder then, that the applications are becoming smaller and more efficient. Due to the fact that the heat loss of the parts does not decrease at the same time, the heat build-up in the control cabinets increases continuously. The manufacturers of control cabinet air-conditioning units have therefore been significantly optimizing the efficiency of their cooling systems in recent years - also to combat the continuously rising energy costs.

LÜTZE supports the resource-saving paths taken by the control cabinet and air-conditioning unit manufacturers with its AirSTREAM wiring system, that allows the climate in the control cabinet to be improved so that the active cooling output can be minimized. In contrast to conventional control cabinet designs with mounting plates, the design is separated from the wiring level in the AirSTREAM. Cable ducts that impair the flows are avoided. Also, a chimney effect is created behind the wiring frame. Ideally, the cold air is guided downwards to the rear and then to the front and upwards again. Therefore, a cool zone is created on the rear side of the cabling. Permanent air circulation is generated between the warmer wiring front side and the cooler wiring rear side.

Practical test set up for AUDI

The positive effect of the AirSTREAM system on the temperature level and distribution in the control cabinet was recently examined in practice under everyday conditions in the Audi engine factory, Hungaria in Györ.

To this end, two production systems on site were equipped and wired each with four control cabinets with the same construction and power supplies. The only difference: System I was equipped with a mounting plate and System II with the AirSTREAM frame. Otherwise, both systems were identical. The same field number 3 in both cabinets was examined (see Fig. 2). It was equipped using the following fields: 3 x 1200 mm, 1 x 600 mm, height 2000 mm, depth 600 mm.

System I was acclimatized by means of an air-conditioning unit with 1,500 Watt heat loss. System II by means of heat exchangers with 1,450 Watt. However, the power loss of the two cooling media play a subordinate role because the cold air in both variants comes from the roof. Instead, the study focused on verifying the effect of guided air inside the control cabinet, because the air in the AirSTREAM can circulate freely in contrast to cabinets with a mounting plate. Both measurements in the control cabinet attachments were taken at the same clocking speed for 6 hours each in a production line for fully automatic pressing of valve seat rings and valve guides into the cylinder head of a V6 Otto engine.

The series of measurements was carried out over two days. Measurement I with mounting plate took place on the first day, Measurement II with a LÜTZE AirSTREAM frame on the second day.

After operations started, the ambient and inner temperatures were recorded using 10 measuring sensors. The actual power consumption of the two systems was not examined because it was assumed that the clocking is identical. This also took into account that the temperature was measured specifically at the heat-critical points in the cabinet - e.g. on the components with a high heat loss output (FU) On test day one, an ambient temperature of 22 °C was measured when recording the temperature data on the structure with the mounting plate; on day two when the LÜTZE AirSTREAM wiring frame was used, the temperature was 23.9 °C.

The measuring results in detail

In test setup I with a mounting plate (Fig. 3a) the temperature layers fluctuated between 29 °C and 43 °C after the air-conditioning unit started (approx. 40 minutes after the production start).

When comparing the two control cabinet attachments, it should also be taken into account that the AirSTREAM test setup II was subject to unfavorable underlying conditions: the ambient temperature of 1.9°K was much higher than on the previous day of the measuring series. At the same outer temperature, the cabinet with the LÜTZE AirSTREAM-wiring frame inside would be a further 1.9 K cooler and the curves would be lower. (Fig. 3b)

Summary: Cooling can be proven

The study shows, that using the AirSTREAM wiring frame ensures noticeable cooling and homogenization of the climate inside the control cabinet. This not only protects the installed units from a gradual heat collapse, it also increases their life expectancy.

Further theoretical examinations with the online AirTEMP application shows that no air-conditioning unit would have been needed. At an assumed ambient temperature of 25°C and assuming that usually 70% of the components are operated at the same time (equivalence factor), only a fan such as the LÜTZE AirBLOWER needs to be used. (see Figure 4).

Other sustainable climate improvements could be achieved e.g. using the LÜTZE AirBLADEs. This allows specific cooling air routing in the control cabinet and means that hotspots can be actively minimised around components with a high heat loss.